The one fight most people point to in Floyd Mayweather’s career that could have potentially been a loss was his fight against Jose Luis Castillo on 20 April 2002.  I watched this fight live, and remember it being a close fight, but didn’t score it as Mayweather was 25 years old at the time and no one knew his popularity would sky rocket.  Now that we find ourselves at the end of his career, we look back at this fight as his most difficult fight.  I recently watched the fight again on YouTube and scored it, and here are the results.

Round 1:  Mayweather won this round easily.  He was definitely the aggressor and caught JLC with a few combinations.  JLC did not do much this round, actually looked out of place.
(10-9, Mayweather)

Round 2:  Another easy round for Mayweather, a lot of the same things from Round 1 were repeated in this round. (10-9, Mayweather)

Round 3:  JLC started to figure some things out, but this was still Mayweather’s round as he landed clearer punches, however, he was caught a couple of times by JLC.  Closer round, but edge to Mayweather.  (10-9, Mayweather)

Round 4:  Things start to get interesting in this round as JLC is definitely making grounds and getting the crowd excited.  He had Mayweather on the ropes and was chasing him around successfully.  Mayweather was still able to land clearer punches with combinations as he escaped away from the ropes.  Really close round, but edge to Mayweather.  (10-9, Mayweather)

Round 5:  JLC is no longer playing around in this round, he’s chasing Mayweather and connecting clean punches.  Mayweather was trigger shy throughout the round and even missed a lot of his punches, he essentially took the round off and a beating along with it.  (10-9, Castillo)

Round 6:  Again, JLC is the clear aggressor and is connecting at will, going to the body and landing clean punches to the head.  It’s somewhat astonishing to see Mayweather in this kind of trouble, this is definitely a different Mayweather still learning the art of evasion.  Clear round for Castillo.
(10-9, Castillo)

Round 7:  It’s too easy now for JLC, had Mayweather’s number again in this round.  Mainly landing body shots, chasing Mayweather around and landing big punches.  Mayweather is trying not to get hit and doing a poor job at it, did not land any blows of significance, mainly trying to jab away from trouble.  (Castillo, 10-9)

Round 8:  JLC is in a rhythm and nothing can stop him at this point sticking with what has worked in the last few rounds.  The referee took a point away from Castillo for throwing punches after he was trying to break them.  Otherwise, it would have been another Castillo round.  (9-9)

Round 9:  Mayweather wakes up all of a sudden.  Lands a few combinations and out-punches JLC.  His defensive skills were in display as JLC had trouble landing in this round.  Mayweather became aggressive, perhaps sensing where the fight was headed.  (10-9, Mayweather)

Round 10:  JLC goes back at it as Mayweather decides to take another round off.  Not really sure what’s going through his head at this point. I’m sure he’s not as worried about his record then as he has been in the last few years.  Nevertheless, JLC peppers him with blows to the head and the body.  Furthermore, the referee takes a point away from Mayweather for pushing, as it had been the third warning.  (10-8, Castillo)

Round 11:  This is a fairly even round as they are exchanging punches.  Somehow Mayweather has always been great at exchanges as he has always been quicker than his opponents and more defensive minded, but he avoids exchanges at all costs as is evident he does not like getting hit.  Mayweather gets the best of the round and wins it in my view.  (10-9, Mayweather)

Round 12:  This round was all JLC, no way anyone could have given this round to Mayweather.  JLC again chased Mayweather around the ring and caught him flush several times.  Clear final round for Castillo.  (10-9, Castillo) 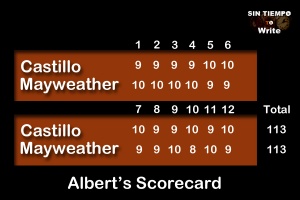 HBO analyst Harold Lederman somehow had this fight 115-111 for Castillo.  His rationale for most of the rounds awarded to Castillo was that he was the aggressor.  This used to be a Lederman’s frequent mistake, that he granted rounds simply for a fighter being the aggressor even if he was being clearly out-punched.  It’s not an objective method of judging a fight.  Even though Castillo was the aggressor for most of the fight, in some of those rounds he simply ate up a bunch of Mayweather’s blows in clear rounds for Mayweather.

Now, the judges were smoking some serious recreational marijuana as their scorecards read 115-111, 115-111, and 116-111 all for Mayweather.  This fight was either a draw or maybe I could have seen either fighter gain another round but that’s it, a two round advantage or three round advantage was simply not the case and they were definitely watching a different fight.

Mayweather’s final boxing record should be 49-0-1.